In actual applications, based on different needs, direction control valve can be divided into different categories:

The Uses and Features of Hastelloy Pneumatic Regulating Valves

The Effect of Gas Ballast Valve in Vacuum Pump 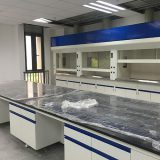